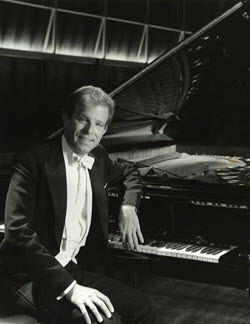 American pianist Irwin Gage was a renowned specialist in accompanying Lieder who collaborated with many of the greatest singers of his day. He was born in Cleveland, OH in 1939 to a Hungarian father and a Russian mother. After studying piano, musicology and literature at the University of Michigan and Yale University, he went on to study at the Vienna Music Academy with Erik Werba. He also received instruction in the French art song repertoire in Paris from French baritone Pierre Bernac. Among the many singers he performed with were Elly Ameling, Arleen Auger, Walter Berry, Brigitte Fassbaender, Dietrich Fischer-Dieskau, Gundula Janowitz, Rene Kollo, Tom Krause, Christa Ludwig, Edda Moser, Jessye Norman, Lucia Popp, Hermann Prey, Christine Schäfer, Peter Schreier, Cheryl Studer and Martti Talvela. Gage made recordings on such labels as Decca, Philips, Telefunken, Deutsche Grammophon, EMI and CBS Masterworks which garnered numerous awards, including the Grand Prix du Disques, the German Schallplattenprei and the Edison and Grammophone awards. As a teacher, Gage taught song interpretation classes at the Academy of Music and Theater in Zurich (now Zurich University of the Arts) from 1979 to 2005, and at the Saarbrücken Music Academy. Gage served on many juries for international music competitions and gave master classes in Europe, Japan and the United States. Gage died on April 12, 2018 in Zurich, where he resided for many years.

Eugene Istomin (November 26, 1925 - October 10, 2003) was born in New York to Russian immigrant parents. His early aptitude for the piano came to the attention of Alexander Siloti, who encouraged the young Istomin's studies. 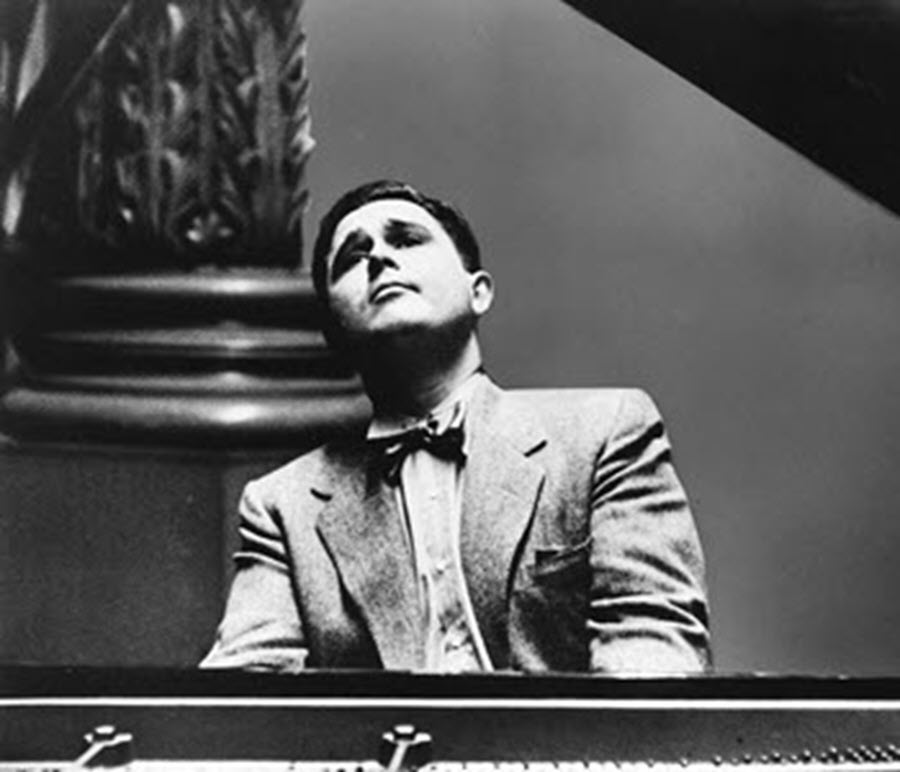 Istomin went on to work with Rudolf Serkin and Mieczyslaw Horszowski at the Curtis Institute in Philadelphia. At the age of 17 he won the Leventritt Award and made his debut appearances with the New York Philharmonic and the Philadelphia Orchestra. Regular tours of the US and Europe soon followed, and beginning in 1950 he was one of the featured artists at the Casals Festivals in Prades and Perpignan, France.

As soloist or chamber-music player he collaborated with such musicians as Adolf Busch, Pablo Casals, Alexander Schneider and others. Later he formed a highly successful trio with violinist Isaac Stern and cellist Leonard Rose. They earned particular acclaim for their cycle of Beethoven Trios and Sonatas during the Beethoven bicentennial year of 1970.

Istomin continued his worldwide concert appearances until shortly before his death, and made numerous recordings for Columbia Records, including concerti of Beethoven, Brahms, Chopin, Mozart, Rachmaninoff, Schumann, and Tchaikovsky. He was regarded as one of the group of "distinguished American pianists," all born in the 1920s, that included his colleagues Leon Fleisher, Gary Graffman, and Jacob Lateiner.

In addition to his musical pursuits, Istomin was an avid bibliophile and his impressive book collection is now part of the University of Maryland Libraries. It is anticipated that The Eugene Istomin Collection, containing extensive documentation of his musical career, will become part of The International Piano Archives at Maryland in the near future. Further details will appear here.

William Kapell was a brilliant American pianist whose life and career were cut short by the crash of an airplane on which he was returning from an overseas tour in October 1953. He was barely 31, but was already acknowledged as the leading American pianist of his generation; some have said he would have been the greatest pianist of the 20th century.

Born in 1922, Kapell studied piano with Dorothea Anderson LaFollette at the Yorkville Settlement School in New York and with Olga Samaroff at the Philadelphia Conservatory and, later, at the Juilliard School. In 1941, he won both a Naumburg Award and the Philadelphia Orchestra Youth Concert competition. This gave him opportunities for major debuts both as a recitalist and as a player of concerti. In 1942, he was given the Town Hall Endowment Series Award, providing him with yet another Town Hall recital during the 1942-43 season. He then signed a contract with RCA Victor and recorded a wide variety of repertoire for that company. (All of Kapell's RCA recordings have been reissued in compact disc format.)

He toured North America annually thereafter, performing both with major orchestras and as a recitalist. He became an advocate of contemporary American piano music, and seems to have been especially prized by American composers. In 1945, he played a series of concerts in Australia, beginning to build an international reputation. He toured South America three times (1946, 1948, and 1951). He seemed to have a particular affection for music of South America that is reflected in his personal collection of piano music. He first played in Europe in 1947. In mid-1953 he performed in Tel Aviv, played at Casals's Prades Festival, and gave his final series of performances during the course of a three-month Australian tour. Returning from Australia, his plane crashed into a mountain moments before its scheduled landing in San Francisco.

View Collection in the Finding Aid 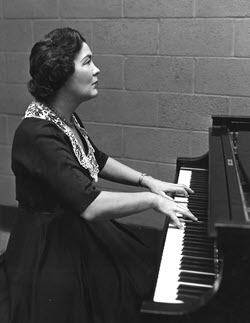 Elisabeth Katzenellenbogen was born in Zurich, Switzerland, where she studied at the Zurich Conservatory. Her post-graduate studies were with Robert Casadesus in Paris and Robert Teichmüller in Leipzig. A successful European concert career was interrupted by the outbreak of World War II. She emigrated to the United States in 1941 and would go on to hold teaching positions at Vassar College, Goucher College, and the Peabody Conservatory of Music. Katzenellenbogen was a lifetime advocate of the music of C.P.E. Bach. She regularly programmed entire recitals of C.P.E. Bach’s music and recorded The Six Essay Sonatas for Lyrichord records.

The Katzenellebogen Collection consists of concert programs, and a large number of recordings of concert and studio performances of works by C.P.E. Bach, W.F. Bach, Mozart, Haydn, and 20th century composers such as Bartók, Fortner, Berg and Krenek.

The distinguished American pianist and teacher Constance Keene was born in Brooklyn, New York on February 9, 1921. Her early piano studies were with Kathryn Makin. At the age of 13, three years after her formal recital debut, she began working with Abram Chasins (1903-1987), the well-known pianist, composer and broadcaster, whose influence on the young pianist was decisive. Through Chasins's influence, Constance played privately for, and received encouragement from, such eminent figures of the day as Leopold Godowsky and Josef Hofmann. In 1943 she was named winner of the Naumberg Competition, appearing in her Town Hall debut recital later that year.

Chasins and Keene were married in 1949 and made a number of acclaimed recordings of duo-piano repertoire as well as performing together with the Boston Symphony under Serge Koussevitzky. On her own, Ms. Keene appeared as concerto soloist with major orchestras in the US and Europe, including the Philadelphia Orchestra, Chicago Symphony, New York Philharmonic, the Hallé Orchestra of Manchester, and the Berlin Philharmonic.

In 1946, Constance Keene replaced the indisposed Vladimir Horowitz at a recital before an audience of 4000 in Springfield, MA. She became the only woman pianist to have substituted for Horowitz at any of his frequent cancellations. In addition to her concert activity during the 1940s, Ms. Keene embarked on a second career as a teacher. Among her private pupils at the time were the two older children of Artur Rubinstein. In 1963, shortly after Ms. Keene's recording of the complete Rachmaninoff Preludes was released, Rubinstein warmly praised her interpretations: "I cannot imagine anybody, including Rachmaninoff himself, playing [the Preludes] as beautifully."

In 1969 Constance Keene joined the faculty of the Manhattan School of Music, eventually serving as chair of the school's piano department and becoming one of New York's most sought-after teachers. In 1997 she was named to the school's board of trustees, and in 2004 the MSM awarded her an honorary Doctor of Musical Arts degree. Ms. Keene gave master classes on many occasions in Europe, Asia and South Africa. In addition, she was in frequent demand as a judge for piano competitions, serving on the juries of the Cliburn and Naumberg competitions, among others.

Constance Keene was a fairly prolific recording artist whose first solo discs appeared on the Mercury label in the early 1950s. A number of compact discs on the Protone and Newport labels reflect the breadth of her repertoire, containing not only familiar works of Bach, Chopin, Mendelssohn and Rachmaninoff, but also rarely-played sonatas by Dussek, Hummel, Weber, and MacDowell.

Constance Keene died in New York on December 24, 2005 and was survived by her second husband, the attorney Milton Kean.

The Constance Keene Collection in IPAM contains a number of scrapbooks documenting her career as both performer and teacher. IPAM also holds Ms. Keene's personal score collection containing many comments and notations.